When we last left our victims, the cowboy-turned-plumber had been made aware of a possible skunk under the house just as a main waterline blew.  He had given up the claustrophic chore of crawling beneath the concrete to conquer the catastrophe, postponing it until tomorrow. But the dreaded “TOMORROW” is now today.  BUT soon there will be water and all will be well.

Well. Water.  See what we did there?

COMMERCIAL BREAK (because our dilemma is like a train wreck and you can’t look away, we dare to advertise earlier in the show, knowing you will stay tuned for more.)

Stephanie begins her day as usual, up at the crack of 8 or 8:15. She meanders to the bathroom, turns the faucet to run her water, and is faced with the harsh reminder: NO water. No hot morning bath. She plugs in the curling iron and brushes her teeth from a dwindling pitcher of lukewarm water. Lukewarm water and toothpaste first thing in the morning. Gag.

AND, to make matters worse, one of the vanity lights is blown, leaving her face only half lighted. And it’s not the pretty half. She brushes through her hair and begins to curl. But something is not right. Something is quite wrong.  Her hair is flat.  A tragic by-product of sleeping on damp hair the night before. She curls more. And more. Lifting and spraying as she goes. Despite her best efforts, her hair WILL be flat today. Flat. And she has to go out in public. In public. Where there are people. Real people. Who will see her flat hair. The horror.  The horror! (cue melodramatic music)

COMMERCIAL BREAK FOR BUMPITS. “Bumpits -from flat to fabulous in seconds”. 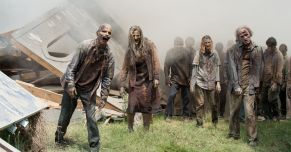 looking like a decaying extra from The Walking Dead. He hurts. All over. Neck pain. Back pain. Knee pain. “Bad day,” he comments, “aching all over. Swelling. Pain. Head hurts”

“It’s not a tumor,” the cowboy groans. He is in no shape nor mood to go to Plumb-o-Rama, much less do the plumbing repairs.

No shape at all.

Disheartened and dusty, Stephanie must face the reality that there will be no running water again tonight.  She thinks, “So this is how the people in Mississippi feel.” 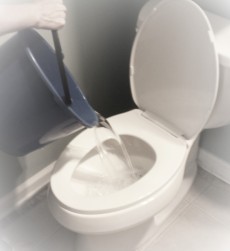 Yet another day without water. The laundry is piling up. The dishwasher is overloaded. The pitchers of water are running dangerous low. The toilet is being flushed with    a 5-gallon bucket of pond water.

Will the promise of a hot shower ease the cowboy’s aches and pains? Will he be able to complete this job with one MORE tomorrow?

After all, tomorrow is another day.

Stephanie raises her fist to the sky,
“With God as my witness, I’ll never have flat hair AGAIN!”

Stay tuned for the thrilling season finale of PipeBusters on The Reality Channel.

In my younger years I was a television junkie. I turned the TV on during the Today Show and turned it off during Letterman.  I didn’t sit and watch it all day, mind you, but it was ON. Omnipresent in the background, you might say.

And I paid attention. I could rock the pink category in Trivial Pursuit like nobody’s business. (For you children, Trivial Pursuit is the “hard copy” forerunner of last year’s wildly inferior Trivia Crack. You had to actually use your arms to roll dice and move game pieces. It was a gruelling process.)

Television is not high on my priority list these days.  I mean, I don’t have a clue why The Walking Dead killed off Glenn or why Kurt Weller’s name is tattooed on Jane Doe’s back.

Often I go days without ever flipping on the 42” screen that dominates my cozy little den. When I do, it’s to catch two-thirds of a day-old Jimmy Fallon on Hulu, or fawn over a composite of Jeremy Renner clips on YouTube.  That, however, is a confessional blog for another day.

Three or four times a year I binge-watch shows that comes highly recommended, like two of my favorites, House of Cards or Newsroom.

So I know I’m five years behind the curve, but lately I’ve been on a Downton Abbey spree. Fabulous wardrobes; historical references; wonderfully, Britishly understated melodrama.

My husband, however, refuses to watch along, mentally placing Downton Abbey in the same category as monogrammed handbags, ostentatious gift-wrapping, and herbal tea lattes.

Yes, the show’s language, clothing, and notions of class-distinction are antiquated. Okay, so Lady Mary isn’t a cowgirl.  And Lord Grantham doesn’t grunt, but rather makes eye contact and speaks in grammatically proper sentences.  And Carson, the butler, wouldn’t be caught dead discussing a fart. Ever.

Compared to Django or The Hangover, Downton could almost appear, well, educational.

Still, I contend that Downton’s cast mimics the characters of every other tv show, albeit better dressed.  Like Mad Men or Grey’s Anatomy or whatever drama you prefer,

there’s the schemer, the snob, the liar, the gossip, the rebel, the clueless, the pot-stirrer, the goody-two-shoes, the scandalous, and the pitiful, all interacting for the purpose of amusement.

Come to think of it, Downton mimics the characters I know in real life as well, all of whom interact for the purpose of amusement, they just don’t realize it. Without them, my life would far less interesting. Also without them, I would have no reason to don my tiara and feel superior.  (I do hope you detect the tongue in my cheek.)

So here’s to the characters, fictional and real, who make the plot lines of my own little drama infinitely more entertaining.