She sat on the back row of the bleachers wearing a brown plaid A-line jumper and ribbed white turtleneck, swinging her feet back and forth and wondering why they were HERE on this show today instead of in Kindergarten melting leaves & crayon bits in-between pieces wax paper, or dancing around the room to “Chim Chim Cheree” like yesterday.

“Who is Captain Spaceman anyway?” she wondered to herself, looking at all the rows of lights hanging from the high ceiling of the television studio. Oh, well, at least the man in the giant blue leotard says our time is almost up, he just needs to draw a name for the prize. Sure, a prize would be nice, but not if she had to walk down in front of everybody to get it. No thanks. Her little wallflower self would rather just sit here watching her feet swing than be made a spectacle of, thank you very much.

Wait. What did he say? T

he giveaway is a Twenty Thousand Leagues Under the Sea game? Icky Yucky Ooky. She may only be five years old, but she’s smart enough to know that Jules Verne, and for that matter, all Science Fiction stuff is for boys. And she did NOT want boy stuff.  No thank you very much. Besides, surely they wouldn’t call out a girl’s name for a boy’s toy. That would just be mortifying – like that awkward moment when the boy in front of you toots and then looks at you so everybody else will think it WAS you. She’s rather die. But she told herself there was nothing to worry about. Only a 1 in 30 chance even if they DID include the girls, “Which they wouldn’t,” she thought just as they announced … HER name. WHAT? NOOOOO! 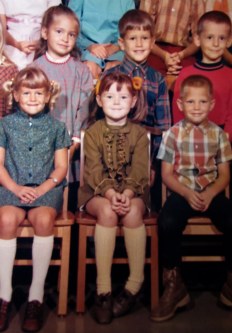 And that, boys and girls, was the beginning of my lucky streak. I have gone on to win tickets and gift certificates to nice restaurants and books and videos and essay competitions and savings bonds and a video player and $200 in a photo contest and numerous cds, weekend getaways, a smart tv, and if you have EVER been to a “sales party” with me, be it Pampered Chef or Creative Memories or Tupperware or whatever, you know my name is ALWAYS the one that gets drawn for the door prize. Always.

Some decades later, only a few petals remain from my wallflower days. I have since learned to embrace Jules Verne, giant squids, AND feminism, no thanks to that stupid boy board game.

Today the sun is shining, my one-year-old blog is flourishing, and no fewer than a dozen of my stories and articles have been featured or purchased by BlogHer, Experts Among Us, and others.  I feel very VERY lucky.

And since I just got my vanilla latte free, I guess my good fortune still holds.

Either that, or I’ve already purchased ten this month and my punchcard was full. Still…

*The little dude next to me was my first “boyfriend” despite the fact that I was clearly taller. But he gave me a bracelet. Gotta love a guy who gives you jewelry. And it’s quite possible the girl next to me was Cindy Brady.