I rarely rant. I almost never rave. If I seem taller than usual, it’s more likely from my new sparkly summer wedges than from standing on a soapbox. But … well … I want to say something that’s going to make some of you furious and others of you feel justified:

Natural childbirth is not possible in an unnatural world.

And we do live in an unnatural world — X-Men, Photoshop, reality tv, fast food, Donald Trump’s hair — and we believe what we see. (Except maybe for the hair.)

Our culture encourages those same “unreal” perceptions regarding childbirth. Movies and tv shows tell us labor will begin with intense pain and agony. We are shown images of women screaming and begging to be medicated. We are told to freak out when water breaks and rush to the hospital. We listen to the horror stories of our “friends.” We ignorantly put ourselves in the hands of people who are exceptionally well-trained to handle abnormalities and emergencies, hence all our births have become such abnormalities and emergencies.

And that’s just not reality.

We are NOT educating ourselves. We have lost our communal knowledge of the art of birthing and have chosen instead to simply trust the medical profession to decide what is best for us.

You can SAY all day long, “I want a natural birth,” but if you aren’t educating yourself, your chances of actually HAVING one are practically nonexistent. I mean, if you want to be a safe driver, but you don’t read the Driver’s Manual, or learn to operate a vehicle from someone who knows how, or even take a driver’s ed class, you MIGHT get in the car and know WHERE you want to go, but what are the chances of actually making it there safely? Probably about the same as having an uneducated natural birth.

Now, by “educating yourself,” I do NOT mean taking the little hospital class that tours you through Labor & Delivery, makes you watch the epidural video and discusses all the things that “could go wrong” and how the hospital will deal with them. NO. NO. An emphatic NO.

Read for yourself: Literature from both ends of the spectrum, from Twinkle Ding-Dong Yoga Birthing toShut Up and Put Your Feet in the Stirrups. Go ahead and take the Labor & Delivery tour at the hospital, then go to an independent childbirth class. Drink in A Baby Story on TLC, then chase it with The Business of Being Born on Netflix.

What determines the outcome of your labor hinges sharply on choosing to educate yourself and surround yourself with the support you need.  And, as a doula, while I heavily advocate drug-free birthing, my job is to help you have the experience you want. Schedule a C-section, squat in a cornfield, whatever. It is, after all, YOUR body, YOUR baby, YOUR decision.

For those of you who have known me for say, longer than 28 minutes, you have surely already heard this story.  But I refuse to apologize for the retelling of this July 4th classic.  Much like our other unique holiday traditions: grilling pork chops for Thanksgiving dinner, sleeping in on Black Friday, and watching “Die Hard” at Christmas, this family classic must be revived in honor of the Fourth.

The summer I was barely pregnant with Kevin, my daughter, Kacey, was a very precocious, almost 6-year-old. One day in June, she marched down the hall of our apartment, donning her blue daisy outfit, hands on her hips as she proclaimed, “Okay mommy, I’ve been thinking about this. If I’m gonna be a big sister, there’s some stuff I need to know. I know it takes a mommy AND a daddy, but what I don’t get is how they get together!”

Bother. She’s FIVE. I had hoped I wouldn’t have to have the sex talk with her until she was like 12 or 35.

However, I’ve always held the belief that if a child is old enough to ask a question, she is old enough to deserve an honest answer. But exactly WHICH answer? How do I explain this simply enough for her to grasp without damaging her innocent little psyche? (“Well honey, you know on Sunday afternoons when mommy lets you watch a Disney video and daddy closes our bedroom door..?”)

Um, no. That probably falls under the “Scarred for Life” category.

And then I remembered Lennart Nilsson’s book, “A Child is Born”. Perfect. It even has tasteful photographs.

So I dug through all of my hippie birth books and soft-porn breastfeeding manuals, and proceeded to show her anatomy diagrams (i.e., “boy parts” and “girl parts”). After that, we moved on to images of the egg and sperm. We talked about how the female usually just has one egg, but the male has millions of tiny sperm and they swim around really really fast.

This is the point where swirling finger gestures were involved.

We moved on to prenatal ultrasound images, and ended with birth photos taken from a “northern” perspective. She seemed content with the explanation, and I breathed a sigh of relief that “the talk” (or rather, the first of many talks) was satisfactorily accomplished.

Fast forward ten days. We went out to the lake, along with my parents and 10,000 other people to view the July Fourth Fireworks Extravaganza. We sat on the bank of the lake amid the throng of spectators, when one particularly interesting firework exploded. First it burst white, then hundreds of tiny little swirly sub-bursts followed. It was gorgeous. The crowd “OOOOOHHHED” and “AAAAHHHED”, then my diminutive, but very loud daughter declared… 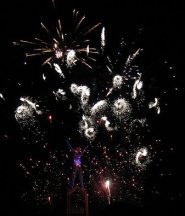 A hush fell over the crowd. Eyes stared and glared. Pretty sure my dad swallowed his tongue. My mother gasped in reactionary disbelief as though to say, “WITH WHAT SMUT HAVE YOU BEEN CORRUPTING MY GRANDDAUGHTER”S MIND?”

I, well I was mortified.

Kacey and I then had another talk. “When in the course of human events it becomes necessary to candidly proclaim your truths, please, PLEASE remember we hold this truth to be self-evident: there are some things you never, ever say in front of your grandparents.”