She sat across the booth from her teenage son in one of those chain restaurants. Dark wod, huge bar, kitschy memorabilia hanging from the rafters, and seven strategically placed big-screens

distracting you from the fact that you are paying $26.94 for a couple of burgers and a glass that contains more ice than tea.

The Boy grabbed one and queried, “Who recorded ‘We Didn’t Start the Fire’?”
“Billy Joel!” she blurted.

“Jurassic Park was released in what year?”
“1993, the same year you came screeching into my life like a hungry raptor,” she smiled and stuck out her tongue.  He gave her one of those teenage boy looks.  The kind of look that says, “You’re much too old to be as funny as you think you are.”

He continued, “What fictional town is the setting for many of Stephen King’s novels?” She paused for a second to search the recesses of her right brain for this information hidden between Casablanca and Clapton, Eric.  Two words…begins with a C…

The Boy raised an eyebrow and his lips curled into an evil little grin, believing he had stumped her, but this kid was clueless how much Stephen King his mother had read over the years.
“Castle Rock!” she finally proclaimed.

Eventually one of the little white packets posed a personal pop-culture question:

It read, “Who would play you in the movie of your life?”

Oooo, a deep, thought-provoking question…let’s see…she’s too young for Meryl and much too old for Mila.

Tongue-in-cheek she responded, “Easy.  Because of our physical similarities I would have to say…” 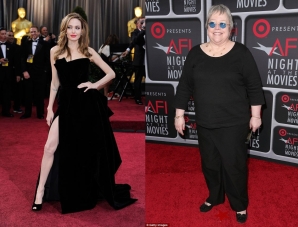 and before the name “Angelina Jolie” rolled off her tongue, her son spurted out,

Ugh.  He was seventeen and REALLY good at it.

She then mumbled something about a sledgehammer and hobbling him like James Caan, but lucky for the Boy, the burgers arrived.